Caltagirone and its Ceramics are amongst the top of things to do while in the Ragusa area.

It is an enchanting town, situated between  “Monti Iblei” and “Monti Erei”, which has been a stronghold for different populations including Byzantines and Normans. Following the devastating earthquake of 1693, it was destroyed and rebuilt in the Baroque style, like so many other towns in the south east of Sicily.

The town is not only famous for its architectural style but more importantly for its ceramics. Here, the land is rich in clay from which beautiful colourful and unique designs are produced. There are many shops throughout the town displaying the ceramics which here have ancient origins (in fact some of the earliest ovens date back to the Norman and Muslim era. Then, the process has continued through the centuries)

Our tour begins with a visit to Cattedrale di Caltagirone. The building, dedicated to St. Giuliano, it was  founded in the Middle Ages and rebuilt, following the 1693 earthquake, entirely in the Baroque style. The facade was created in the 1900`s in the Liberty style: one of its distinguishing features because it is a very rare style for a religious building. Inside, there are some very beautiful paintings and frescoes painted by Giuseppe Vaccaro.

We then continue to the famous steps, Scalinata di Santa Maria del Monte, which were constructed at the start of the 1600`s by Giuseppe Giacalone to connect the lower part to the historical centre of the town. The 142 steps are decorated with Majolica tiles telling the history of the ceramic from Caltagirone which, with its bright colours (green, light blue and yellow), is one of the most important features of the town. The steps lead upto the Chiesa di Santa Maria del Monte. The Church was founded in the 1100`s and was rebuilt after the earthquake. Characterised by the Basilica plant, ithouses inside the precious “Madonna di Conadomini”: interesting work of the thirteenth century Byzantine.

After the steps we will visit the Ceramic museum. Opened in 1965 it is housed in a limestone  building created in the 1950`s. With its vast collection of over 2500 finds, This museum traces the entire history of pottery from the 4th century BC through to modern day. Moreover, thanks to its documentation on the art of ceramics,  this museum is second only to the Museum of Faenza.

The tour ends with a visit to the shops displaying the ceramics. Trying to resist buying one of the items made here will be very difficult!

FILL OUT THIS FORM TO BOOK YOUR ITINERARY! 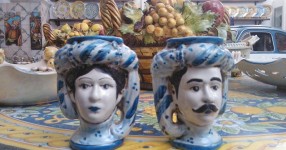 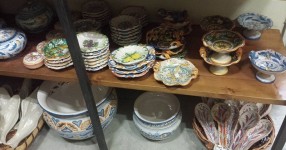