“The River Irminio Natural Reserve” was established in 1985 and is managed by the Regional Province of Ragusa (currently named Free Municipal Consortium).

It is a natural site that lies in the municipalities of Ragusa and Scicli, whose extension is about 130 hectares which are divided in two area:area A (“Reserve area”) and area B (“Preriserva area).

The area A is characterized by a strong historical and environmental value. In this area, the ecosystem has preserved entirely its own peculiarities: is here, in fact,  that the green vegetation meets the blue of the Mediterranean Sea, separated by a strip of white sand. The area B, instead, is an area in which the economic development is controlled in order to protect and integrate the area with the surrounding territory.

The reserve is developed around the mouth of the homonym  river, which develops itself along the province of Ragusa for 55 km and then flows into the Mediterranean Sea. In the ancient world, the long course of the river was the vehicle and the fastest path to connect the interior  territories with the coast, where the trade is always occurred.

Until the Middle Ages, the water regime of the river was regulated by the presence of woods along its path. As a result of the deforestation process, which was aimed to recover land for agricultural activities, there was a slow and inexorable silting of the mouth of the river. The result of this silting, has been a geomorphological evolution of the landscape which has given  rise to the formation of ridges dune in which has settled the typical flora of the bush Mediterranean.

Inside the reserve, there are, in fact, significant specimens of “Juniper Cuddly”, “Mastic tree” and other shrubs and small trees typical of sandy areas. Approaching to the river and, in particular, to its mouth, the vegetation changes assuming the typical characteristics of riparian zones with shrubs and trees such as “Willow” and “Poplar”. Together with them, we also find other plants typical of the Mediterranean forest, as the Sicilian Tea and the Asparagus.

As for the wildlife, it is possible to observe the presence of migratory birds from nearby Africa, that use this area to rest and refresh themselves after crossing the Mediterranean Sea. Among the species of birds reported: the “Kingfisher”, the “Gray Heron”, the “Cormorant” and the “Egret”. Fauna is also represented by interesting examples of reptiles, amphibians, mammals and non-native species such as Nutria and Boar.

Within the River Irminio Natural it is possible to do four naturalistic paths: “Path of Carob” , “Path of Gelso”, Path of the Dunes” and the “Path of Trazzera”, along which you will be immersed in an unspoiled nature.  In addition to the paths, you can also visit the “Natural History Museum” which is located  in the Visitor Center.

The River Irminio Natural Reserve  is a place in which colors and scents remain indelible in the minds of the visitor. 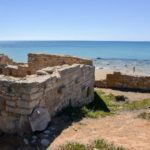